Let’s Hear it for the IT Guy

Home — Bluff Blog — [:en]General Info[:es]Información general[:] — Let’s Hear it for the IT Guy 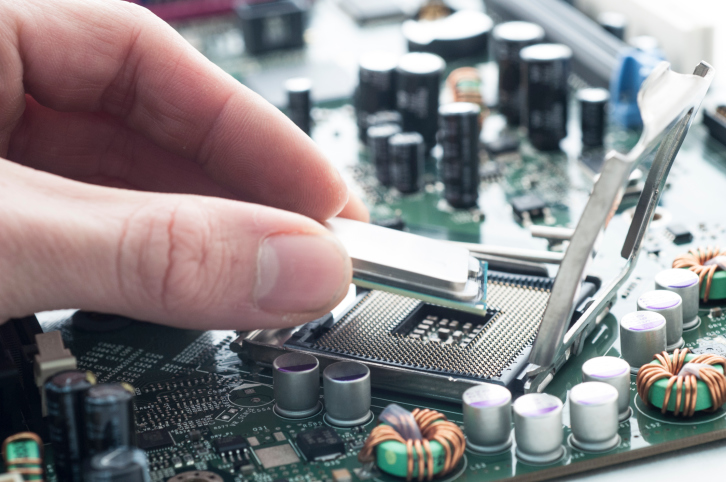 We’ve all said it: “I don’t know what I’d do without my computer.” It can feel weird to admit and we’re probably all a little tired of hearing it, but it really is true. In this day and age, computerlessness is utterly crippling to productivity. And for this reason we should all thank our lucky stars for IT guys. These are the men and women who not only tolerate computers, they understand them, and they spend their days putting out the technological fires that delay and derail our business.

While some companies employ entire squadrons of IT specialists, Bluff Manufacturing’s needs are met by the one and only Tony Otto, Bluff’s sole IT manager. Tony says that this solo operation fits him perfectly. “As the only IT guy, I don’t just fix printers, I handle data, get pulled into production, manage new additions to the network. It’s a very broadening experience.” And Tony has been preparing most of his life for this, saying he’s always known that he wanted to work with computers. When he was 8 years old, Tony’s dad brought a computer home from work, and Tony fell in love. He started programming at 13, took every programming class he could, read programming magazines, and experimented endlessly. After graduating with a degree in computer programming, Tony became a communications officer with the Air Force, but left in 2010 in search of an opportunity that would allow him to work more closely with computers. After sharpening his skills at a managed IT company, Tony found his way to Bluff Manufacturing, where he had to slightly shift from his technological focus.: “I had never dealt with major manufacturing devices connected to a network before. It’s really a different type of computer. Half of it is what you’re used to, but there are parts that are specifically made to drill something or cut something. There are new pieces to learn.”

Learn he has, all the while supported by Bluff’s very positive, almost family-like culture: “The people here care. People at Bluff will ask if they can help me when I’m stressed, they’ll ask what they can do.” This share-the-load mentality at Bluff is important because, as Tony states, “We’re doing more work than ever to improve as a company.” This progress is, of course, a group effort and doesn’t come without a lot of collaborative problem solving. “There are always going to be problems,” Tony admits, “nothing’s ever perfect. But it’s how you deal with that that matters, and I think there’s a big problem solving mentality; let’s solve this problem together.”

While it’s clear that his love for computers runs deep, Tony says that, at the end of the day, the thing he likes most about working in IT is helping people. “My philosophy is that a computer is merely a tool – but it’s probably the most powerful tool that the human mind has ever come up with. When they work, there are so many advantages. When they don’t, things grind to a halt. So I see myself as critical in making sure we’re running as efficiently as possible and doing our job well as a company.” And for that, we are grateful for Tony and all IT managers everywhere.

Joining our mailing list gives you the benefit of exclusive special offers from Bluff Manufacturing
We use cookies on our website to give you the most relevant experience by remembering your preferences and repeat visits. By clicking “Accept”, you consent to the use of ALL the cookies.
Cookie settingsACCEPT
Manage consent

This website uses cookies to improve your experience while you navigate through the website. Out of these, the cookies that are categorized as necessary are stored on your browser as they are essential for the working of basic functionalities of the website. We also use third-party cookies that help us analyze and understand how you use this website. These cookies will be stored in your browser only with your consent. You also have the option to opt-out of these cookies. But opting out of some of these cookies may affect your browsing experience.
Necessary Always Enabled
Necessary cookies are absolutely essential for the website to function properly. These cookies ensure basic functionalities and security features of the website, anonymously.
Functional
Functional cookies help to perform certain functionalities like sharing the content of the website on social media platforms, collect feedbacks, and other third-party features.
Performance
Performance cookies are used to understand and analyze the key performance indexes of the website which helps in delivering a better user experience for the visitors.
Analytics
Analytical cookies are used to understand how visitors interact with the website. These cookies help provide information on metrics the number of visitors, bounce rate, traffic source, etc.
Advertisement
Advertisement cookies are used to provide visitors with relevant ads and marketing campaigns. These cookies track visitors across websites and collect information to provide customized ads.
Others
Other uncategorized cookies are those that are being analyzed and have not been classified into a category as yet.
SAVE & ACCEPT
Bluff's COVID-19 Status

Bluff offices and plants remain open and operational at this time and we will continue to make every effort to serve the needs of our customers.

Get a Quick Quote
×
☰